The neo-Gothic Neues Rathaus was constructed between 1867- 1908 and houses the world famous Glockenspiel. The 43 bells play a 15 minute carillon at 11.00am and between May and October 12.00am and at 5pm. The 32 mechanical figures of musicians, knights etc re-enact the marriage festivities of the marriage of Duke Wilhelm V to Renate von Lothringen in 1568. 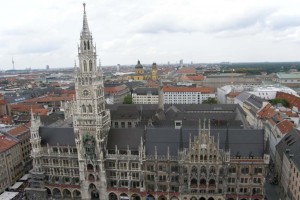 The Coopers dance which follows was first performed in 1517 as a way of averting the Pest (plague) The 85m high tower is open to visitors and has the  München Kindl on the top. The marble column in the centre was erected by Maximilian 1 in 1638 and is topped by a Hubert Gerhard sculpture of the Virgin Mary.

The tower at the end of Marienplatz is now a toy museum but was originally part of the Altes Rathaus (Old Town hall) which is next door. The archway leads towards Isartor. The 1345 building was completely rebuilt after the damage suffered in the second world war. Under the Munich Rathaus is the Ratskeller, a large restaurant with many different eating areas and all to a high standard.

Take time to visit the Fraunkirche which is just off from the pedestrian area on Kaufingerstrasse. The two towers are world famous and recognise as the symbol for Munich. It is also in the menu bar of this city guide to identify this website.