The Munich Löwenbräu Brewery (Lowenbrau Brewery) is over a hundred years older than the famous Bavarian purity law for beer (1516). The first documented reference to an inn known as “Zum Löwen” dates from 1383. Following the usual practice of the time, the landlord brewed his own beer, and it is from this inn that the present-day Munich brewery has grown up.

600 years ago in Munich (Muenchen)

The year 1516 was none the less a decisive one for Loewenbraeu as indeed for all other Bavarian breweries. From that time on, barley hops, yeast and water were the only substances permitted in beer. Bavarian brewers soon demonstrated their skill in complying with these restrictions, and to this very day it is an iron rule that Bavarian brewers – and their colleagues in the remainder of the Federal Republic of Germany – must not use any additives, preservatives or “taste improver’s” in their beer. The quality of the product proves the wisdom of this age-old ruling.

Between 1826 and 1855, the brewery made the jump into the modern industrial age. During this period, what was considered to be an ultramodern and efficiently planned brewery was built on the site which Loewenbraeu AG still occupies today. By 1865, a quarter of all the beer brewed in Munich came from the Löwenbräu ( Lowenbrau Brewery) vats. In 1872, the brewery was one of the first German companies to take the form of an “Aktiengesellschaft” or public stock company.

The German and in particular, the Bavarian market for beer is unique of its kind. Two figures will serve to illustrate this:

1. One third of the world’s breweries are in Bavaria.
2. Of about 1,300 breweries in Germany, Bavaria accounts for 900, maybe less now, as there have been mergers.

Success on such a keenly contested market is not achieved without good reason. Competition is severe. It is impossible to achieve the same share of the market, as a major brewery abroad would regard as normal. For every German beer capable of claiming a nation-wide reputation, there are many smaller regional competitors. Despite these difficult market conditions, however, the brewery has succeeded in building up an image as the best known German beer. Furthermore, there is a positive side even to such unusually tough market conditions.

No other country has built up such know-how in the brewery business. The supplying industries work to exceptionally high quality standards. The ingredients, particularly hops, are among the finest in the world. Brewing is a scientific discipline with its own college of advanced technology at university level. This background serves to emphasize the success enjoyed by the brewery as an exporter and licensor. 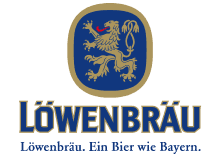 The first bottles of Löwenbräu ( Lowenbrau for the US market ) were shipped beyond the borders of Bavaria in the middle of the last century. From this modest start, a flourishing export trade soon built up. Though initially content to supply its beer to other European countries, the brewery began in due course to export to every continent of the world. The first beer in barrels was exported to the USA before the turn of the century.

A true story, however unlikely it seems: in the nineteen-twenties Löwenbräu had a “simulator” built so that the movements of freighters on the high seas could be studied in the laboratory. This was one of the measures the company took to prevent its beer from deteriorating on long sea voyages.

After the second world war, the brewery was soon able to recommence its traditional export trade. Today, Löwenbräu is enjoyed as the epitome of German beers in more than 140 countries of the world. An American advertisement accurately expresses the high esteem in which beer drinkers hold Löwenbräu “If you run out of Löwenbräu, order champagne”. What better way to express the premium character of Löwenbräu beer.

The company’s determined efforts on export markets bore fruit in a different way in 1974, when the first license to brew abroad was granted to the Philip Morris/ Miller Brewing Company (USA).  This information may not be correct today as I understand the beer is now imported direct from Germany. If you have any information to confirm this information, please let me know. This was the start of a further world-wide success. Today, Löwenbräu is brewed under license in Great Britain, Greece, Hong Kong and Japan, to name only some of the leading licensing countries.

The above information was kindly supplied by the Munich Löwenbräu Brewery for inclusion in our website. For further information please write to:

The information above about the Munich Löwenbräu was supplied some years ago and may have to be updated. Possible names are Lowenbrau. Löwenbräu or Loewenbraeu due to alphabet restrictions.