The Munich Frauenkirche or Cathedral is normally called the Frauenkirche but the full name is “Cathedral of Our Dear Lady” in English. There is extensive information on this church, perhaps one of the best is the Wikipedia article. The well known twin towers of this building are recognised as the symbol for Munich, and are used on this site is the website icon.

The twined onion- domed spires of Munich’s late Gothic cathedral are one of the well known symbols of the city. The cathedral was designed by Joerg von Halspach and built between 1468 and 1488. The towers where finished in 1524. Many treasure are inside the church including stained glass from the 14th and 15th century. The choir sits among carved wooden busts of prophets and saints which were carved in 1502.

The Cathedral was badly damaged during the 2nd world war, and restoration work was only complete in the early 1990’s.

The Devil’s Footprint or Black Footprint is steeped in legends. Supposedly the foot print of the Devil before the Church was consecrated. There is a short article explaining the history of this strange tile in the Cathedral. A celebrated fable relates that the cathedral architect made a pact with the devil, who supplied funds on condition that the building would have no visible windows. On completing his work, the architect took the devil to a point where no window was in view. The devil stamped his foot in rage and departed, leaving the mark you can see to this day. 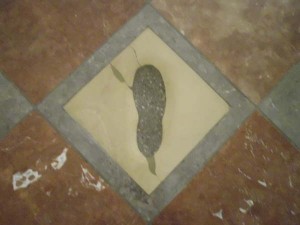 This is situated at the rear of the Church. See if you can see any windows when you have your foot on the tile.