You may not have heard of Benjamin Thompson later call Baron Rumford, but he was responsible for creating the original Englischer Garten.

This garden is in fact one of the largest city parks in the world, extending for nearly 5Km and covering 373 hectares. Munich has to thank an American born soldier Benjamin Thompson who joined the service of Elector Karl Theodor in 1783 and reformed the Bavarian army. 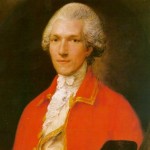 In 1789 he persuaded Karl Theodor to transform the land north of the Residenz into a park based on the 18th century English gardens. The Chinesischer Turm was built in 1789 and modelled on the Pagoda in London’s Kew gardens. He took the name of Count Rumford in 1791. He died in 1814.

Many restaurants around the Englischer garten, including Chinessischer Turm, Aumeister, Hirschau and Seehaus are offering a soup based on the original recipe used to feed the Bavarian soldiers. See the recipe on Wikipedia