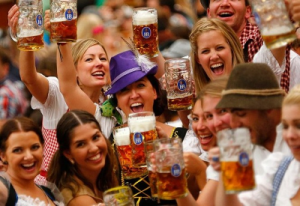 Surely, you’ve heard of the Oktoberfest? This is the beer festival in Munich Germany, which is visited by millions of people from all over the world every year. The Oktoberfest has a very old tradition, where beer and food abounds, as well as fun and exciting atmosphere. In fact, people have so much good time at Oktoberfest that access to the tents of the main breweries at the festival, are reserved months before the date of the celebration.
If you travel to Munich in late September and early October, Oktoberfest is a must-see event. Even if you don’t have reservation for any tent, you can still enjoy many other activities and attractions at the festival venue. After all, the festival is not only about beer.

History of the Oktoberfest: 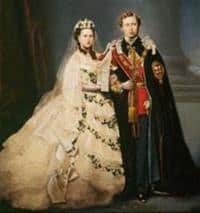 The beginnings of this celebration go back to about two hundred years ago. The Oktoberfest began as a wedding party when Prince Ludwig of Bavaria married Therese of Saxony-Hildurghausen in 1810. He wanted every person of Munich to take part in the celebration. The event was of unimaginable dimensions, a horse race was organized and enormous quantities of food and beer were offered to all residents of Munich, it was then the world welcomed the Oktoberfest.

People celebrated with the king and praised him for his generosity. The Oktoberfest had been declared a success, hence the prince decided to celebrate it again the following year along with the festival of agriculture. During the following years more elements were added to the celebration and in 1819 it was decided that the festival would be celebrated every year. Over the years, the festival extended its duration and changed its starting date from October to September due to the pleasant climate that exist at towards the end of the month in Bavaria.
Currently Oktoberfest is celebrated in many places around the world. Latin American countries like Brazil and Argentina are noted for their own version and hold local parties.

The 2018 Oktoberfest starts on 22nd of September and ends on 7th of October. It’s held in a meadow called Theresienwiese which is located in the west of the city centre of Munich, capital of Bavaria. It’s celebrated in the same place yearly which made the locals dub it as a holiday also known as “The Prairie”. To reach Theresienwiese, take advantage of public transport in Munich, the main ones are the U-Bahn and trams. Many of the routes that will take you directly to the festival site.
One of the most important things you must do before going to the Oktoberfest is to book a table in one of the tents where they offer a German beer of your choice. On the opening day, it’s advisable to arrive early before 9 o’clock in the morning to find a seat and enjoy the opening ceremony of the festival.

The beer of the Oktoberfest: 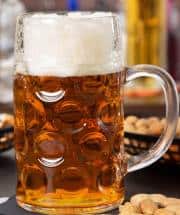 Only the six breweries in Munich are allowed to serve beer in the tents of the Oktoberfest. The breweries are: Paulaner, Spaten, Hofbräu, Hacker-Pschorr, Augustiner and Löwenbräu. Beer served at Oktoberfest is produced exclusively for the festival.
One of the main crowd drawers of the Oktoberfest is the Maß, the 1 litre beer mug. At the festival it is not possible to order a medium or small beer but only a Maß. To order you have to say in German “Eine Maß bitte” (“a mass please”) to the beautiful ladies who serve at the tables dressed in traditional costumes.

The Tents of the Oktoberfest: 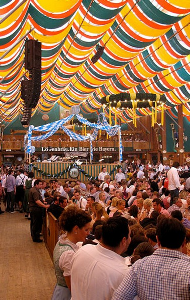 The Munich Oktoberfest consists of 14 large tents and 21 smaller marquees, with approximately 100,000 seats. Each house is different from one another and in each of them different types of beer and speciality foods are served. To get inside the halls, you have to stay in line in a long file and have to wait for quite some time given the enormous turnouts which start at the early hours of the morning, Therefore, we advise you to arrive early to ensure you get a seat!
Besides there are also outside eating areas in the grounds outside the tents, in which it is easier to find a place, provided of course that it doesn’t rain.

The busy days are at the weekends or during the evening when the locals head for the tents of the Oktoberfest after business hours. The number of visitors far exceeds the available seating, it is not easy to get seated. In addition to this, tent rules stipulate that only those who are seated can drink, to avoid confusion.
To avoid the queues, you can book a table inside the halls of most of the breweries. The seats are bookable though in limited numbers.

The ceremonies and traditions of the Oktoberfest: 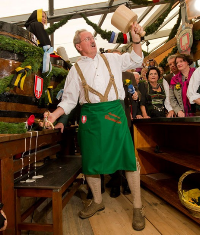 The program of Oktoberfest is marked by traditional ceremonies that have been repeated for decades. In the opening ceremony, held in the brewery’s tent Schottenhamel , which is called “O’ Zapft is” (“‘it’s tapped’”). At 12:00am the mayor of Munich officially opens the festival by uncorking the first barrel with a wooden hammer blow. Beer may be served only from now on.

Other events during Oktoberfest that needs remembering:

– The parade of Oktoberfest brewery owners (the Wiesn-Einzug der Festwirte und Brauereien), during which the owners horse drawn floats are paraded, similar to a carnival happens before the official opening on the Saturday.

– The parade of traditional costumes and riflemen (Trachten und Schützenzug). It takes place on Sunday and lasts for 2-3 hours. The route runs through Central Munich, traditionally led by the Münchner Kindl, the symbol of the city of Munich. This ceremony commemorates the silver wedding anniversary of Teresa and Ludwig.
–Other events are held at the Hippodrom, like the old Carnies Club.

Some interesting facts about the Oktoberfest:

• During Oktoberfest 30% of Munich’s annual beer production is consumed.
• Every year 12,000 people work together to make the festival a success. Of these, 1600 work as waiters.
• There are seats for about 100,000 people.
• The main Oktoberfest breweries sold 6 million litres of beer in 2016.
• Oktoberfest beer Krugs are made of thick glass and typically have decorative logos of the breweries that take part in the festival, making them a popular and coveted souvenir among visitors. However, it is strictly forbidden to take these jugs, but they can be bought in the tents at a more or less reasonable price. If you buy a Krug, save your purchase ticket, because the police inspect the visitors of this event looking for stolen Krugs including outside the Theresienwiese. When someone is caught stealing a jar, they are find €50 immediately.
• In addition to the tents, there are also many fun fair rides for everyone to enjoy at the Oktoberfest

Each year Munich holds a competition to find the next years logo. A prize is made for the top 3 winners. This is the logo or symbol for the 2018 Munich festival, 22nd September till 7th of October.